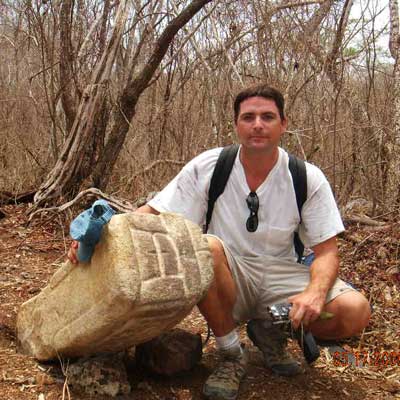 Albert Coffee Archaeotours is an archaeological tour company specializing in immersive, intimate and highly informative tours of archaeological sites near San Miguel de Allende, Guanajuato, Mexico. Tours to sites throughout Mexico are also offered. Central Mexico, Chiapas, Oaxaca and the Yucatán are other regions in Mexico where the best guidance is offered to historical treasures like Palenque, Yaxchilán, Bonampak, Teotihuacan, Xochicalco, Chalcatzingo, Tula, Toniná, Chichen Itzá, Monte Albán and many more.
Archaeologist Albert Coffee and his colleagues provide the most professional and informative presentations given by actual anthropologists who are extremely qualified and constantly digging deeper into the pre-Hispanic history of Mexico. Accommodations in boutique hotels at colonial treasures like Cholula, Tepoztlán, Merida, Oaxaca and San Cristóbal de Las Casas make travel comfortable and rewarding.

Cañada de la Virgen is our specialty. The archaeological zone located just 15 minutes southwest of San Miguel de Allende is where Albert, a graduate of Louisiana State University and federally licensed tour guide, was invited to help excavate during the 2004 field season. Through the years he has documented the legends, wisdom and memories of the elders of the ranch communities on and around the historic ex-hacienda, upon which the site is located. This experience as well as his work in locating and documenting sites in areas like coastal Oaxaca and a career in teaching both language and social sciences throughout Mexico have made him one of the most qualified guides to Cañada de la Virgen and other sites in Guanajuato state. Over 25,000 visitors have taken Albert’s tour since its opening to the public in 2011, as well as to other archaeological sites recently opened to the public in Guanajuato state, including Peralta, Plazuelas and El Cóporo. This is a “must do while you’re here…!” experience that can’t be missed. Don’t get left behind!
Guided tours of San Miguel de Allende, Guanajuato City, Dolores Hidalgo, Mineral de Pozos, Atotonilco, the Indigenous Chapels and other colonial sites are also provided, as well as other immersive cultural and ecological experiences throughout the region and throughout all of Mexico.

The Museum of Prehispanic Astronomy explores the cycles of the Sun, Moon, Venus and the constellations from the viewpoint of Cañada de la Virgen. The museum uses lightboxes, 3D and lenticular images to allow visitors to immerse themselves in the world of Mesoamerican astronomy, and is located in Agustín Gonzales, on the highway between San Miguel and Cañada de la Virgen.

This museum was developed by Dra. Rossana Quiroz Ennis, head of the Celestial Observation Program at Cañada de la Virgen, who has spent nearly ten years making superbly detailed astronomical observations at the site, as well as cartographic analysis, topographical surveying and excavation. She is a member of the Permanent Seminar of Archaeoastronomy and Cultural Astronomy at ENAH, and is also the author of El Cerro y El Cielo, which describes her work at Cañada de la Virgen.