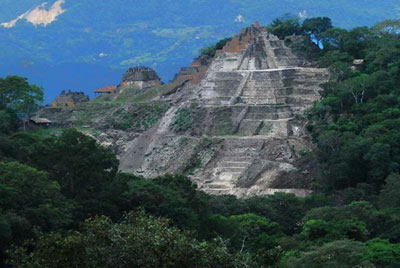 On the road from the scenic highland Chiapas town of San Cristóbal de las Casas to the Mayan rainforest site of Palenque, at about the halfway point, there is a little known and rarely visited Mayan city known as Toniná. 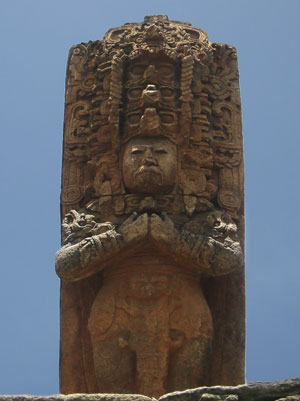 A bit off of the beaten path, near the town of Ocosingo, it is a site that should never be missed by those truly interested in Mayan and Mesoamerican archaeology. Long believed to be on the periphery of the Classic Mayan heartland and of secondary importance, it is now known that it was actually a rival of Palenque during the late classic period (600-900 CE) and a major player in the power games undertaken by such great Mayan city states as Palenque, Tikal and Calakmul during the early through late Classic periods.
Toniná in the local Mayan dialect means ‘The Place Where the Darkness Falls’ or ‘The House of the West’. During its apogee, as deciphered through some of the script left behind, it was called the ‘City of the Divine Captives’. The blood of rival rulers was believed to fuel the movements of the cosmos, as is seen in graphic detail through the various sculptures on display which show just such captives in various phases of subjugation and sacrifice and often shown beheaded.
The ‘Mural de la Muerte’ (The Mural of Death) is another fascinating feature in the art of Toniná and seems to relate to the emergence of the lords of the underworld into the living realm, perhaps something they predicted would occur at the end of the Fourth Sun. Other important motifs include elements from the Mayan creation story, the Popol Vuh, and the Mesoamerican ballgame.

Its rulers seemed to have taken great pride in the conquest and capture of enemy rulers, a case in point being that two sons of the great king Pakal of Palenque are recorded to have been taken prisoner at a certain time during its apogee. These types of military victories are on display vividly in the site museum, one that is equal in quality to many others throughout the Mayan realm, through bas-relief sculptures which show these bound captives in defeated postures as if in preparation for sacrifice. Glass cases inside the museum also display the unique ways that the Maya elite performed cranial deformation, as some of their elongated and altered skulls are showcased for visitors to contemplate.
Like all Mayan sites, Toniná has its own unique style of architecture and design. Set in steamy tropical farmland surrounded by the dense Lacandón jungle, it’s just one of the many botanical zones that you traverse as you travel from the highlands of Chiapas down into the rainforest. This setting adds to the mysterious and exotic feel of the place as one climbs the many-tiered structures that make up its core. Seven major platforms support palace complexes, living spaces, temples and administrative compounds.

It was discovered that what was originally thought to be a natural hill upon which was superimposed the different layers of the northern ‘acropolis’ was actually entirely constructed by the occupants of the site and turns out to be a pyramid 75 meters in height. That makes it 10 meters taller than the great Pyramid of the Sun at Teotihuacán! This structure is now considered to be one of the largest ever discovered in Mesoamerica, rivaled in size only by those at places like El Mirador in Petén region of Guatemala.
But that’s not all! The recent discovery of a stone sarcophagus and the offerings placed inside are as splendid as those of the ‘Red Queen’ at Palenque, possibly the wife of Pakal the Great. A hieroglyphic text depicting the name of the Sixth ruler of Toniná, whose name is deciphered as K’inich B’aaknal Chaahk, or ‘Snake Skull’ now highlights the significant role that Toniná played in the region. Toniná is can now be considered a major player in the region and a Mayan city comparable to Palenque and Bonampak.
Toniná displays in its art a unique connection to other Mesoamerican cultures, in particular to the Toltecs of the central ‘Altiplano’. This Maya-Toltec connection may be related to the rise of Itzaes, the great founders of the centers that arose later in central Yucatán, like Chichén Itzá. It was also one of the longest lasting of the great Classic Mayan empires, reaching its peak of influence between the years 800-900 CE when other major centers in southern Mexico, Guatemala, Belize, and Honduras were already in decline.
This site is just one of the high points on the ‘Path of the Jaguar’, our 10-day excursion into the Mayan heartland of Chiapas. The next one will be taking place in early December! Don’t get left behind!