An Ancient Wonder Revealed to the Public

We’ve all heard about the importance of 2012 to the ancient Maya but for ‘Northern Central Mesoamerica’, a newly designated region long neglected by archaeologists and historians which includes San Miguel de Allende and most of Guanajuato state, it is 2010 that may have been the year to remember… as it was not only the bicentennial of the Mexican war of independence, which was sparked by the hero-founders of the region, but also the year in which an archaeological treasure was revealed to the public. That treasure, which has now been excavated and studied by a multi-disciplinary and multi-institutional team directed by the INAH Guanajuato archaeologist Gabriela Zepeda García Moreno, is the archaeological zone Cañada de la Virgen.
The site lies just outside of San Miguel on land that is part of the ex-hacienda of the same name, surrounded by scenic hills and small canyons which abound in flora and fauna that in some aspects remain unaltered after centuries. I was lucky enough to have been invited by Gabriela to work alongside the team excavating during the 2004 field season. 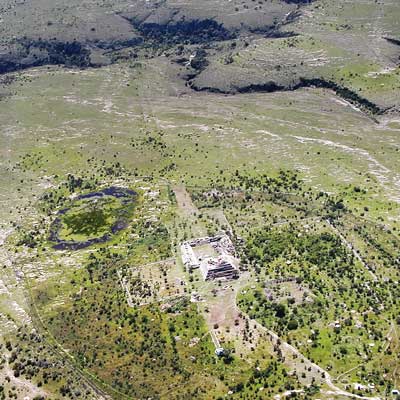 I gazed upon the main pyramid again from a distance as I arrived with Gabriela one cool and sunny morning in the spring of 2009, when I returned to San Miguel after three years as the director of a language center at a university in coastal Oaxaca. It glowed beneath the bright sun, across a small canyon, on what seems like a wide plateau beneath the gaze of the sacred hills that command the horizon. Its geometric design set it apart from the surrounding landscape but I could see how it may have been mistaken over the years for a small hill when covered by dirt and vegetation. It would be my first time to visit the site since the time I had spent working and learning from the various scientists involved in its exploration back in the spring and summer of 2004. It was quite a shock upon arriving with Gabriela six years later to see how much work had been done and how many of the structures had been excavated and consolidated, that had been merely cactus covered hillocks back then.
I spent that day with Gabriela and staff from the Museo Alhondiga de Granaditas in Guanajuato taking photos and learning about the recent excavations, the preservation of the natural habitat within the zone (certain species of native plants displayed along  a scenic pathway) and the unique, forward thinking plans for its opening to public visitation. I remember imagining how my anthropology professors, leaders in Mesoamerican research, would have loved to have been there and to have been part of such an amazing discovery as this.
There are many fascinating archaeological sites in Mexico and it is hard to describe to the general public, who are mainly aware of the more highly touristed centers, the importance of smaller or lesser known sites currently under investigation. But it is at these places that scientists are on the cutting edge of research and understanding of the ancient indigenous cultures of Mexico, their daily habits, knowledge of the cosmos and intimate tie to the earth and the forces of nature. Cañada de la Virgen is one of those focal points of research and the site of pioneering archaeological studies. San Miguel holds the position of one of those unique places in Mexico where the vestiges of colonial as well as pre-Hispanic history have become accessible to the general public; opening doorways into understanding and a feeling of our past, present and future as human beings.
After years of labor during a unique and pioneering study, Gabriela, the Instituto Nacional de Antropología e Historia and INAH Guanajuato, with previous funding and support from the local, state and federal governments, were in the last stages of preparation as the roadway and entrances into the archaeological zone were then being finished. The grand opening, on February 11, 2011, welcomed the public into a sacred and serene place whose marvelous secrets have been left over the centuries to the earth and humanity.
So, what do we know now that some of the excavations have been completed? The answer is… we know a lot more than we could have ever imagined before Gabriela and her team unraveled many of the mysteries that the site holds after over 17 years of continuous investigation. Some of those mysteries, like how the layout and construction of the various temple complexes align to the landscape and heavens and what was the identity of the ancient people who occupied these canyons and forests so long ago have now been made much clearer. The general public is now privy to evidence of the life-ways, culture and architectural genius of the ancient builders of these monuments and the serenity of an obviously sacred space.
So, what exactly is Cañada de la Virgen? Here are a few of the things we can now say: That it is…

In this series I will go into detail to explain all of these unique aspects of Cañada de La Virgen, as I have had the great privilege of working side by side with the people taking part in the excavation process and have had the opportunity to talk at length with Gabriela Zepeda and other members of the research team. These include Rossana Quiroz, the archaeo-astronomer who has spent over 9 years of continual observation and photographic documentation discovering how the site and mainly Complex A serves as a fascinating ‘cosmic clock’. I will focus on facets of the archaeological zone that are of particular interest and importance and that set it aside as unique and exemplary among sites in Mesoamerica describing the important part it played in Mexican pre-history.